Everyone loves Jenga, and it’s suitable for any number of players at any age.

If you’re getting bored of regular-sized Jenga or simply want a more interactive gaming experience, giant Jenga is the way forward.

Played the same way as the traditional game, the only real difference is that the blocks are much larger.

A standard Jenga set has 54 blocks. Each block is the equivalent length of three blocks’ width. 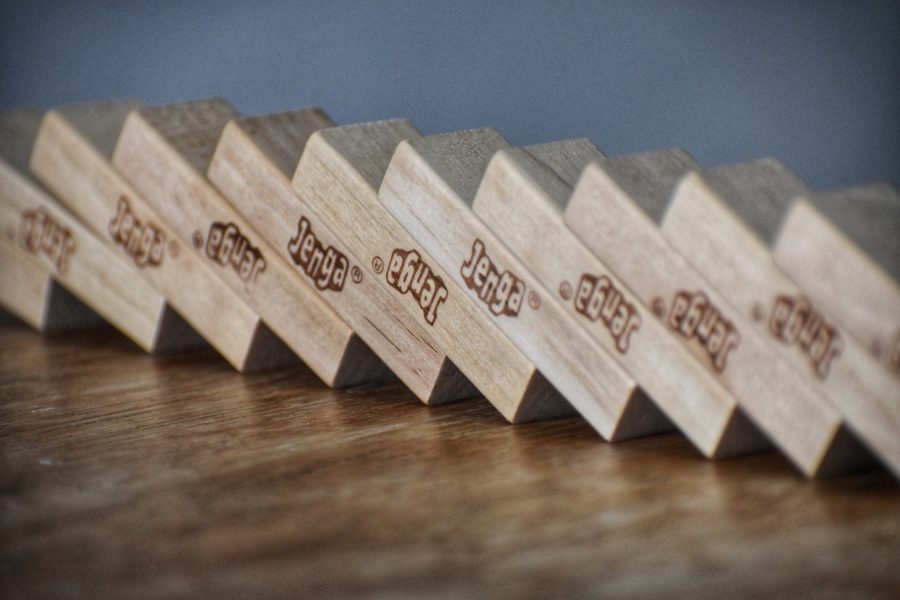 Jenga was created in the early 1970s by Leslie Scott, one of the founders of Oxford Games Ltd.

Scott moved to Ghana and purchased a children’s building game from a sawmill in Takoradi, and from this, the game of Jenga as we know it has evolved. The name derives from a Swahili word kujenga, meaning to build.

The first commercial appearance of a Jenga set was in January 1983 at the London Toy Fair. The first set was manufactured in Yorkshire. Since 1982, the V&A Museum of Childhood has held and displayed one of the first ever Jenga sets.

What will I need?

It is vital to ensure you are taking reasonable safety precautions when working with heavy-duty building equipment. If you have long hair, we recommend tying it back so that it does not cloud your field of vision or get caught in any mechanisms.

We also suggest wearing goggles to protect your eyes from sawdust and wood chippings. If you are using loud mechanical equipment such as a Miter saw, we suggest wearing ear protection as well.

If your 18” square plywood has rough edges, your first step is to gently sand these down until they are smooth.

Cut the 6’ long pine into 2 15” boards and 2 18” boards. These will form a square base for the plywood to sit on top of. With the 18” boards parallel to one another, screw all 4 together to form a square. Place the 18” plywood on top of this board and screw tightly onto the square frame.

If you wish to add feet to the base, now is the time to screw them on.

Move on to making the Jenga blocks. You will need 54 blocks measuring 10½ inches each. You should get 9 blocks from each 8’ 2x4” pine block. If you have a Miter saw, you can set it to stop after cutting a 10½ inch block. Otherwise, we recommend marking out the blocks and sawing carefully with a hand saw.

Using an electrical sander, or simply a few sheets of sandpaper, smooth out the edges and sides of each block. This is important as it ensures you do not get splinters while playing the game.

Coat each block of wood with the linseed oil. Allow to sit for a few minutes and then wipe off the excess. Rub each block with a cloth to ensure an even coat.

If you wish to paint or decorate your blocks in any way, now is the time to do so. Allow them to dry completely before you move and stack the Jenga blocks. 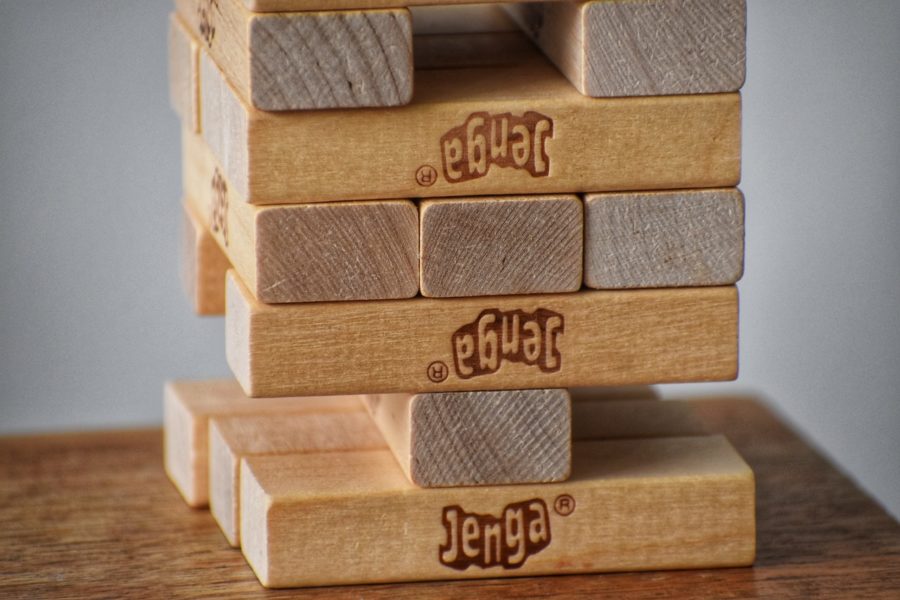 How do you play giant Jenga?

Giant Jenga is played in the same way as traditional Jenga.

Begin by placing the base on a level surface. The blocks are stacked up on top of this in rows of 3, in alternating directions.

The first row should contain 3 blocks laid with the long sides touching. The next layer should be laid perpendicular to the first. The long sides should still be touching one another.

If you look at it head-on, in the first row you should only see one long edge, and the second layer should look like 3 short edges.

Continue to stack the blocks up in this alternating fashion until they are all incorporated into the tower.

The game begins when the first player pulls a block from anywhere in the structure, except the top layer.

This block must then be placed on the top of the tower and you move on to the next player.

The game continues and the removed blocks are replaced on top of the tower in the same alternating pattern of 3.

The game finishes when the tower collapses. This could be as a result of a load-bearing block being removed, or because of too much weight at the top of the Jenga tower.

Whoever’s turn results in the tower collapsing is the loser of the game.

How do you store giant Jenga?

The simplest way to store giant Jenga is to place the blocks in a large reusable bag, laundry basket, or box. These are all simple and cheap storage methods.

If you have been bitten by the DIY bug, we have included instructions for a wooden carrying case. The first thing you will need to do is measure the size of your blocks to figure out the area you need.

Measure the width, depth, and height you will need. Add 1½ inches to each of the measurements so that you have a little wiggle room to get the blocks in and out.

Measure the center points of the side boards and mark holes where you want the carrying handles to go. Drill holes and saw out the handle gaps.

We suggest sanding down the inside of the handle spaces to stop splinters from getting into your hands.

Screw all of the pieces of wood for the box together. Sand down and coat in linseed oil or wood stain. You can even varnish it at this point if you like.

Allow it to dry before storing the Jenga pieces inside.